The case for Ethereum and why it’s valuable

I believe that the Ethereum is valuable. Here is why…

I first learned about crypto in 2013, roughly 4 years after the first bitcoin was mined. Since then, I’ve always been convinced of one thing: blockchain is an amazing technology that solves important problems (like the double spending problem) but bitcoin doesn’t hold any value. Why? It’s rare, sure, there will only be a total of 21 million in existence. But that’s not enough to make something valuable. For something to be valuable, it has to be rare AND useful. And bitcoin is not useful to anyone (yet). No one holds bitcoin because they need bitcoin. They hold bitcoin because they believe that someone else with pay a greater amount of traditional (fiat) currency down the road for that bitcoin. And that’s the definition of a speculative asset. More on what makes things valuable here.

So, in my mind, bitcoin has never been valuable. And like Warren Buffett, I wouldn’t have paid $25 for all the bitcoins in the world. Similarly, all the other crypto currencies were just created by unscrupulous individuals exploiting the greed of the unsuspecting masses. That assumption was my mistake (although I still believe that the vast majority of crypto tokens are in actuality unsustainable Ponzi schemes). It turns out that at least one crypto currency isn’t like the others: it’s rare AND useful.

Imagine that I would start a raffle business. The idea is simple: you, faithful readers, wire me 100 francs each. I collect the money from everyone who participated and then, I transfer the entire pot of money to a randomly selected participant. How successful would this business venture be? Would you participate in it?

I hope not. It would be silly, wouldn’t it? The risks are just too high. How can you be sure that I will actually wire the money to someone and not keep it for myself? How can you be sure that I won’t « randomly » select my wife who just « happened » to participate in the raffle too? This business wouldn’t work because it requires too much trust. And it’s just not worth it to put all the guarantees in place.

But what if you could transfer the money, not to me, but to an impartial robot in an inaccessible location and that robot would collect the money and select the winner in a completely transparent way? Transparent, that is: everyone would have access to the actual algorithm used. And inaccessible, that is: no one, not even me, can change the algorithm. That would surely increase the number of participants in this raffle, right? Because no one would need to trust me personally anymore. They would just need to trust that the robot is actually transparent and accessible.

My friends, this robot is the Ethereum virtual machine and its ability to handle smart contracts. It’s beyond the scope of this article to explain how Ethereum works but if you want to investigate further, I can recommend this article.

Alright, maybe you don’t really care for my raffle business. But consider this: every business operates on trust. And trust is enforced by contracts and lawyers. When a supplier doesn’t deliver, the client can take them to court. But how efficient is that system really? Even for cases with obvious malice, it takes months and hundreds if not thousands of francs to get a judgment. What if, instead of courts, we would have automatic (algorithmic) arbitrager that no one can corrupt? Surely that wouldn’t make lawyers happy but what about all actors of good faith?

Don’t worry (I’m talking to my lawyer friends here), the Ethereum network won’t remove the need for a justice system. But it can simplify a lot of simple business situations by trusting code instead of people.

One last example: crowdfunding. One big problem with crowdfunding platform like Kickstarter at the moment is: inventors are not always good business operators. They might have a good idea that people are willing to support but they don’t always deliver on their promises. The issue is that once a crowdfunding campaign is financed, the inventor is free to spend that money how he pleases. What if the backers (or co-founders) could have a say in how the money is allocated by giving a vote every time big money is spent? Smart contracts can be programmed that way: every time more than XXX francs goes out of the account, a majority of backers has to agree to it. I bet this feature would make people spend more on crowdfunding because the risks of getting scammed become negligible.

ETH will become even more valuable in the future because owning ETH will become one of the only way to produce ETH. (It doesn’t mean that the price of ETH will increase though, because price and value aren’t the same thing.) In the upcoming Merge, owning and staking a total of 32 ETH (around 32,000 CHF at the moment) will be one of the only way to get fresh ETH. As the Ethereum virtual machine becomes more and more used, more and more actors will want to have a source of ETH (to pay for gas). And that can almost only be achieved by buying a substantial amount of ETH. When demand increases and supply stays largely the same, value increases.

One more case for ETH: Non-Fungible Tokens or NFTs

Why do Rolex owners own a Rolex? It’s a good watch but your phone tells the time too. It looks good but cheaper brands look exactly the same. Let’s be honest: Rolex is a status symbol. People associate Rolex with success. Owning a Rolex tells the world and yourself that you are successful. It also makes you feel part of a select club. You might find this laughable but the truth is that status symbols have always existed and most likely will continue to exist for a long time.

There is a problem though: we spend more and more time online. And what’s the online status symbol? Well, until not too long ago, you would have to rely on real world status symbols, like a picture of a Rolex. But it’s tacky. And people will probably assume that it’s a fake Rolex because no one can tell the difference based on a pic.

Now, what if I could display something (like a piece of art) as a profile picture and everyone would know that this « object » was 1) very expensive and 2) original and undeniably mine ? Would that solve the online status symbol problem? I think it would. And it does. 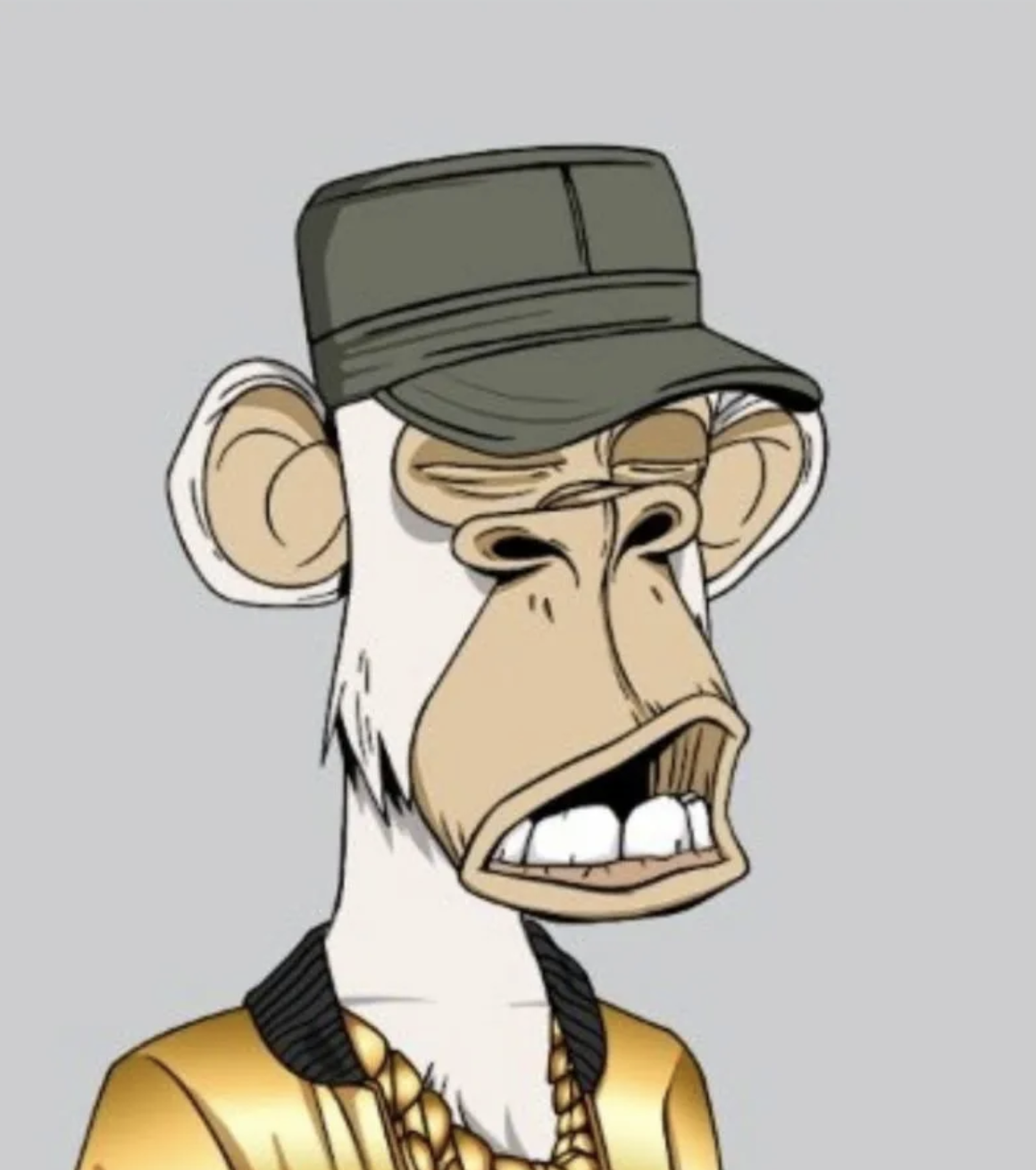 And now he uses it as his social media avatar. Everybody knows how expensive it was and everyone knows, because of the nature of NFTs, that it is his undeniably.

But isn’t that silly? Yes, it probably is. But people spend $450,000 on cars, watches and jewellery (in other terms: status symbols) every day.

But wait, couldn’t I use that same pic as a social media avatar and then everyone would assume that I’m as successful as Eminem?

Yes, you could definitely use that JPEG as your profile pic (the same way I included the image in this article). But everyone would know that it’s « fake » (not the original one) because it’s not your wallet address on a publicly available ledger. It would be like wearing a fake Rolex with a sign saying that it’s a fake Rolex. You can do it, but it would defeat its purpose as a status symbol.

But how does that relate to ETH?

Well, most NFTs « live » on the Ethereum Blockchain. So people need to use the Ethereum network to acquire them. Of course, that could change in the future…

Is buying ETH a good idea?

And I wish I had an answer to that question. Gold is valuable because it’s rare and useful for jewellery and electronics. But what is the actual value of gold? No one knows exactly.

What convinced me to allocate some money to ETH is that I see the usefulness of the Ethereum virtual machine for many businesses because a trustless settlement mechanism. And I’m convinced that NFTs which are currently exchanged for ETH solve the status symbol problem in the online world. Right now, not many businesses and not many individuals recognise that, but I’m betting that it will change.

So like for the stock market, I have no idea what ETH will do tomorrow or 1 year from now. But I’m convinced that there will be more users of Ethereum virtual machine in 2042 than there are today. If more people use it, it will be more valuable (because more useful). And if the inflation of the token remains in check, it means that each piece of the network (each unit of staked 32 ETH) will become more valuable. But I’ve been wrong many times before so don’t take this as financial advice 😉

Portfolio allocation means deciding how much money to invest in which asset. And most people do it wrong.  Let’s that you have 1 million francs. How much should be invested in bonds, stocks, real estate, gold, crypto, cash, etc. ? Deciding how much (in %) should...
Read More

The truth about dividends

Have you ever heard that investors should seek dividends? It's free money, right? Right?  This is the second article of the series « Popular but wrong beliefs about investing » Here is part 1: The stock market is like a casino. Today, I would like to explore...
Read More

Is it a good idea to use your second and third pillars to finance the acquisition of your primary residence?  When a foreigner (like I was) learns about swiss real estate, he gets two shocks. The first one is the prices: it’s almost impossible to get anything...
Read More

What a loop pedal can teach you about financial life planning

Inflation is often seen as the enemy of investment performance and financial planning in general. Inflation is what made the German economy collapse in the 1930s and led (among other things) to the rise of Hitler and the Nazis. But it's the less horrible setting for...
Read More

You’ve probably already wondered why we fight so hard to own rectangular pieces of paper with faces on them. Or to own gold. Or real estate. This is my attempt to answer the question: what gives things value? Including my take on bitcoin. Why do you go to work? Well,...
Read More

What if I told you that investing at 7% can be more profitable than investing at 10%?  In this article about my best investment so far, we’ve seen that performance isn’t everything - liquidity matters just as much. But today, I would like to focus on performance....
Read More