Inflation is often seen as the enemy of investment performance and financial planning in general. Inflation is what made the German economy collapse in the 1930s and led (among other things) to the rise of Hitler and the Nazis. But it’s the less horrible setting for everyone.

So if inflation led to the Nazis, that’s as bad as it gets, right?

My contention is that inflation is the best of two evils and let me explain why.

Inflation essentially means that everything gets more expensive, Just look this McDonald’s menu from the 50s: 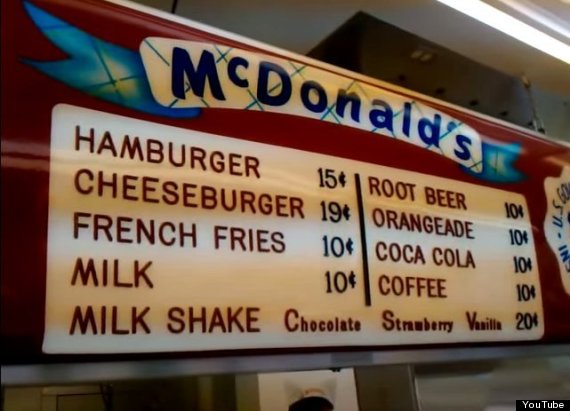 Since everything gets more expensive, but the money in our pockets doesn’t grow, it’s like the value of our money decrease. To use the example of the McDonald’s menu: in the 1950s, 15 cents bought you a hamburger. Now, 15 cents doesn’t even buy you an extra sauce. In the 1950s you could reasonably feed 10 people with $5, but now you would be lucky if you could feed one. So the value of money has decreased by at least a factor 10 when it comes to junk food.

When it comes to airplane tickets, that’s another story. In the 50s, New York – Paris would cost around $300. That seems low, but remember how much $300 buys in terms of hamburgers! 2000 of them! Nowadays, the same ticket would cost around $500, but that’s only 100 hamburgers.

Inflation is notoriously bad when it comes to saving. Because if you had put $5 under your mattress in the 1950s, you would renounce the satisfaction of feeding 10 people and harvest the disappointment of struggling to just feed yourself 70 years later. Inflation eats savings like rust eats iron.

The alternative to inflation

But let’s think of the other possibility: deflation. In a deflationary environment, the value of money would increase. One kilo of banana would be worth 2 francs today but sell for 1.8 francs next year. On a first glance, this might seem great. But what would be the effects on a whole country?

Let’s consider big purchases like a car or an apartment. How would you react if you knew that a car worth 20k today will be worth 18k next year? Or if you knew that an apartment worth 500k today will be worth 450k next year? Well, if you’re a reasonably smart person, you would wait for a year in order to enjoy a 10% discount, wouldn’t you? That is, unless you absolutely needed a car or an apartment right now. So, what happens at the scale of a country in a deflationary environment? Everybody waits for the prices to drop. What happens then? Since car salesmen and real estate agents need to make a living, they would cut their margins and drop the prices even more. Great! But no. Because that leads to even more deflation, which leads to even more waiting, which leads to unemployment and bankruptcy because margins can’t be cut forever.

Low but real inflation creates a slight incentive to buy things now, because they will be slightly more expensive tomorrow. People buying things is good for business, which is good for employment, which good for people. People buying things is also good for investment performances, which you should care about if you own shares (and you most likely do, at least indirectly in your second pillar), because investment performance usually follows business performance.

Let’s make it clear: Hyper-inflation like in Venezuela or in the Weimar Republic is horrible, because it leads to panic and misery. But low inflation (around 2% a year) is a good thing for everyone involved even after taking into account the bad effects and especially after considering the alternative.

Inflation if you have a mortgage

Inflation is also good if you have a mortgage, especially a mortgage for which you only pay interests, like in Switzerland. Why? Because the value of your debt doesn’t change, while your salary increases to match the inflation.

Let’s say that you currently earn 100k per year and borrow 500k to buy a house. So your debt is currently 5 times your yearly income. If you saved 20% of your income per year, you could pay it back by working 25 years. Now imagine that this debt stays untouched for 30 years, assuming 2% inflation. Your salary would have grown to match inflation so you would now earn 181k (100k x 1.02^30). Notice that your standard of living wouldn’t have increased because everything else got 1.81 times more expensive. But guess what hasn’t increased by a factor 1.81? Your debt! Your debt only represents 2.76 times your yearly income and it now takes only 14 years to pay back with 20% saving rate.

This is why states borrow money continuously and why they will never pay their debt back (except Switzerland because… I don’t exactly know why). Because inflation will eat the principal and after 100 years, nothing will be left of it but peanuts.

Portfolio allocation means deciding how much money to invest in which asset. And most people do it wrong.  Let’s that you have 1 million francs. How much should be invested in bonds, stocks, real estate, gold, crypto, cash, etc. ? Deciding how much (in %) should...
Read More

The case for Ethereum and why it’s valuable

I believe that the Ethereum is valuable. Here is why...  I first learned about crypto in 2013, roughly 4 years after the first bitcoin was mined. Since then, I’ve always been convinced of one thing: blockchain is an amazing technology that solves important...
Read More

The truth about dividends

Have you ever heard that investors should seek dividends? It's free money, right? Right?  This is the second article of the series « Popular but wrong beliefs about investing » Here is part 1: The stock market is like a casino. Today, I would like to explore...
Read More

Is it a good idea to use your second and third pillars to finance the acquisition of your primary residence?  When a foreigner (like I was) learns about swiss real estate, he gets two shocks. The first one is the prices: it’s almost impossible to get anything...
Read More

You’ve probably already wondered why we fight so hard to own rectangular pieces of paper with faces on them. Or to own gold. Or real estate. This is my attempt to answer the question: what gives things value? Including my take on bitcoin. Why do you go to work? Well,...
Read More

What if I told you that investing at 7% can be more profitable than investing at 10%?  In this article about my best investment so far, we’ve seen that performance isn’t everything - liquidity matters just as much. But today, I would like to focus on performance....
Read More

How to compare job offers

Comparing job offers goes beyond comparing salaries. There are also vacation days, advantages, perks and… the hidden salary.  When hunting for a new job, a lot of parameters enter the equation. For instance, what kind of job is it? For what kind of company? How...
Read More